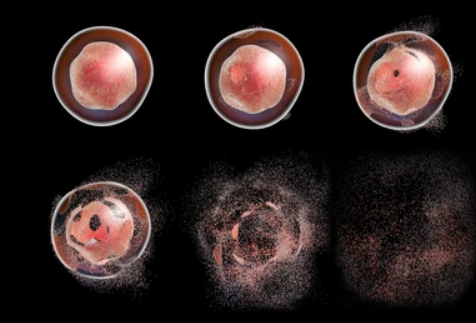 Apoptosis is a basic biological phenomenon of cells, which is the autonomous and orderly death of cells strictly controlled by multiple genes. It involves the activation, expression and regulation of a series of genes. Apoptosis plays an important role in the evolution of organisms, the stability of the internal environment, and the development of multiple systems. Apoptosis regulatory genes are very conservative, such as the Bcl-2 family, caspase family, oncogenes such as C-myc, tumor suppressor gene P53 and so on. These gene products can participate in the promotion or inhibition of the occurrence and development of apoptosis, so the detection of apoptosis-regulating gene proteins plays an important role in studying apoptosis and its regulation. The research on apoptosis has been widely carried out in various fields such as clinical and basic, and the detection method of apoptotic cells is particularly important. Therefore, ELISA with high sensitivity, strong specificity, fast and convenience is widely used in the research of apoptosis.

Advantages of ELISA in Apoptosis Research

As a fast and convenient immunoassay method, ELISA has the following advantages

Clusterin (CLU) is a heterodimer sulfated glycoprotein. Two variants of sClusterin and nClusterin, which play anti-apoptotic and promote apoptosis effects, respectively. Under physiological conditions, it is mainly involved in biological processes such as lipid transport, tissue reconstruction, and cell apoptosis. Research results in recent years have shown that CLU plays an important oncogene role in the occurrence and development of renal cell carcinoma, ovarian cancer, breast cancer, prostate cancer and other malignant tumors.

Granzyme B is an exogenous serine protease, which is a cytoplasmic particle released by cytotoxic lymphocytes (CTLs) and natural killer cells (NK). Granzyme B can first activate cell apoptosis by activating caspase, causing DNA degradation in target cells. Granzyme B cuts many proteins responsible for apoptosis without caspase activity. Granzyme B can also target and kill pathogens in cells by cutting viral proteins. The concentration of granzyme can be used as a new indicator of health and illness.

The caspase family belongs to cysteine proteases, usually in the form of zymogens. It is a heterotetramer composed of two large and two small subunits. Caspase is a key enzyme that causes cell apoptosis. Once the signal transduction pathway is activated, caspase is activated, and then a cascade of apoptotic proteases occurs. The activated Caspase can specifically cleave the peptide bonds on the aspartic acid residues of the target protein, and eventually lead to irreversible cell apoptosis.

Creative Diagnostics has been committed to the application of ELISA in apoptosis research. Relying on strong R&D capabilities and rich experience, we produce many ELISA kits products for apoptosis research, and we provide high-quality customized ELISA kits services, believable ELISA testing services, professional ELISA development services related to apoptosis according to your needs. If you want more information, please be at liberty to contact us.