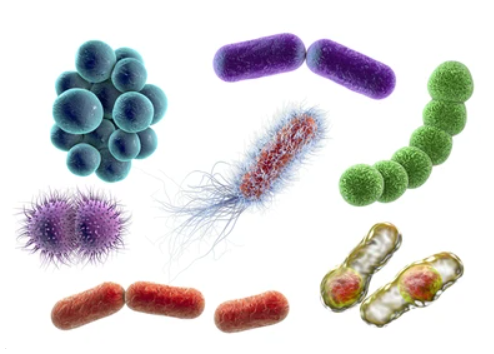 Bacteria is one of the earliest known life forms on earth. It is a prokaryote with a very simple structure. There are thousands of species of bacteria. According to the composition of the cell wall, they can be divided into gram-positive bacteria and gram-negative bacteria; according to their appearance, they can be divided into cocci, bacilli, and spirochetes. The virulence of different bacteria is different, and the same type of bacteria can also be divided into highly virulent and attenuated strains. Among all bacteria, only a few are pathogenic. The pathogenic effect of pathogenic bacteria is closely related to its virulence, the number of invading the body, the way of invasion, and the immune status of the body. For humans, pathogenic bacteria cause tetanus, typhoid fever, pneumonia, syphilis, food poisoning, cholera, and even tuberculosis. For plants, pathogenic bacteria cause leaf spots, fire blight, and so on. Bacterial diseases are usually highly contagious and can easily cause a wide range of infections, which poses a huge threat to human safety.

The Necessity of Using ELISA to Detect Bacteria

Pathogenic bacteria can spread through a wide range of ways, including direct contact, airborne transmission, food, water, and microorganisms. In human history, pestilences caused by highly virulent pathogens have caused countless deaths. The Black Death (Plague) caused by infection with Yersinia pestis is classified as a severe infectious disease that requires international quarantine. Cholera caused by Vibrio cholerae is a severe intestinal infectious disease, and it has also been identified as an international quarantine infectious disease by the World Health Organization. Tuberculosis caused by infection with Mycobacterium tuberculosis has also brought great fear to mankind. In order to prevent large-scale bacterial infections, we need to closely monitor pathogenic bacteria. ELISA, which has the advantages of rapidness, specificity, and high sensitivity, is applied to the detection of bacteria.

The Common Types of Bacteria Detected by ELISA in Microbial Detection

Escherichia coli is a gram-negative bacterium that often parasitizes the intestines of humans and animals. According to the serotype of O antigen, H antigen, and K antigen on the cell wall of E. coli, there are 160 serotypes of O antigen, and there are about 50 and 90 kinds of H antigen and K antigen respectively. E. coli can infect the body through contaminated fingers, food, etc., and cause diarrhea. In severe cases, it can lead to dehydration and lower blood pressure, such as epidemic infant diarrhea and tourist diarrhea.

Salmonella is a common food-borne, gram-negative pathogen. There are many types of Salmonella, and more than 1,000 species have been discovered. Salmonella is spread mainly through contaminated food. Typical symptoms of Salmonella infection include fever, nausea, vomiting, diarrhea, and abdominal cramps. Among bacterial food poisonings, food poisoning caused by Salmonella often tops the list. It is estimated that Salmonellacauses approximately 1.35 million infections, 26,500 hospitalizations, and 420 deaths in the United States each year.

Clostridium tetani are the pathogenic bacterium that causes tetanus and is a strictly anaerobic gram-positive bacterium. The main pathogenic substance is exotoxin, namely tetanus spasm toxin. This is a very toxic neurotoxin with a special affinity for the central nervous system and can prevent the release of inhibitory neurotransmitters (glycine and gamma-aminobutyric acid) at the ends of inhibitory synapses. Clostridium tetani infect the body mainly through deep wounds. After the onset of the disease, the body shows tonic spasm and can die from suffocation or respiratory failure.

Staphylococcus aureus (S. aureus) is a common food-borne, gram-positive pathogen. S. aureus is the most dangerous of all common Staphylococcus. It is often parasitic in the skin, nasal cavity, throat, stomach, carbuncle, suppurative sores, air, sewage, and other environments of humans and animals. S. aureus can be spread through direct contact with infected people, using contaminated items, or inhaling infected droplets, causing skin infections, but it can also cause pneumonia, heart valve infections, and bone infections.

Creative Diagnostics has been committed to microbial detection by ELISA. With a wealth of relevant R&D experience and diversified ELISA kit products, we provide high-quality customized ELISA kits services, professional ELISA testing services, and believable ELISA development services, related to bacteria detection. If you wish a lot of careful data, please contact us.